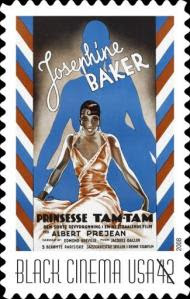 Josephine Baker, the legendary American performer who starred opposite Jean Gabin in a great French film, 1934's "Zou-zou," was honored in her home country yesterday with her very own postage stamp!

FROM ASSOCIATED PRESS:
New US postage stamps honor early black cinema
By RANDOLPH E. SCHMID – 1 day ago
WASHINGTON (AP) — Josephine Baker looks straight at you with bright eyes and shining smile, fearless and demanding attention.
The time is 1935, and the St. Louis native who transfixed France and much of Europe with song and dance stares out from a poster advertising the film "Princess Tam-Tam." Baker starred as a simple African woman presented to Paris society as royalty.
Baker's movie is one of five recalled on a set of U.S. postage stamps being released Wednesday to honor vintage black cinema. Ceremonies marking the sale of the stamps will be held at the Newark Museum in New Jersey, which is holding a black film festival.
"So many things happened in her life that she had never expected," her son Jean-Claude Baker said Tuesday.
"I guess that if she was with us today she would be very honored. At her death she was a French citizen, but she never forgot she was born in America," he said in a telephone interview. "She would be delighted and very moved."
"Despite all the difficulty of colored people in her time, she triumphed over all the adversity that she and her people had to endure," he added.
Another poster, for a 1921 release, provides a taste of the racial divide that sent the young Baker to Europe to pursue her career.
"The Sport of the Gods," the poster proclaims, is based on a book by Paul Laurence Dunbar, "America's greatest race poet," and it adds that the film has "an all-star cast of colored artists."
Other posters in the set of 42-cent stamps are:
_ "Black and Tan," a 19-minute film released in 1929 featuring Duke Ellington and his Cotton Club Orchestra.
_ "Caldonia," another short at 18 minutes, which was released in 1945. It showcased singer, saxophonist and bandleader Louis Jordan.
_ "Hallelujah," a 1929 movie released by MGM. It was one of the first films from a major studio to feature an all-black cast. Producer-director King Vidor was nominated for an Academy Award for his attempt to portray rural African-American life, especially religious experience.
In addition to Jean-Claude Baker and his brother, Jarry, the ceremony was scheduled to include Louis Jordan's widow, Martha Jordan; Paul Ellington, grandson of Duke Ellington; Newark Mayor Cory A. Booker; and Gloria Hopkins Buck, chairwoman of the film festival.
Josephine Baker may be best remembered in the United States for her singing and dancing in Europe, but she also earned military honors as an undercover agent for the French resistance in World War II. Later, she was active in civil rights work and appeared with Martin Luther King Jr. at the March on Washington in 1963.
http://www.jeangabinbook.com/
Posted by Charles Zigman at 6:13 AM