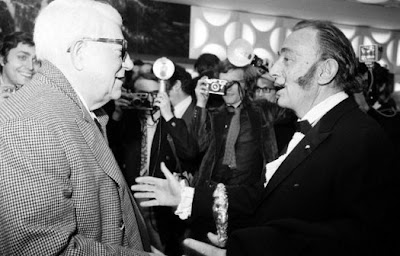 For the entire time I was writing my new two-volume book WORLD'S COOLEST MOVIE STAR: THE COMPLETE 95 FILMS (AND LEGEND) OF JEAN GABIN, I was trying to find a photograph of Jean Gabin and Salvador Dali together.

After all, Dali directed the incredible "drunk sequence" which happens about 15 minutes into Gabin's amazing 1942 noir, Moontide.
Of course, a picture like that never showed up... until today!

Here are Jean Gabin and Salvador Dali together, in Paris, in 1972, thirty years after the making of Moontide.

(PS, years ago, I saw a great still of Jean Gabin and John Garfield laughing it up as they wash dishes together in the kitchen of the Hollywood Canteen, circa 1942. If anybody happens to have it, let me know at author@jeangabinbook.com, and I will post it on this blog-site. Relatedly, if you happen to have any personal Jean Gabin anecdotes -- maybe you met him or your grandmother saw him crossing a street somewhere -- please tell me about it, and I'll post it on this site, as well...)
Posted by Charles Zigman at 4:30 PM No comments: 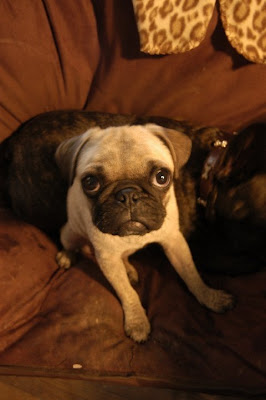 Who's this scrappy little fella?

An audience member who attended this past weekend's Jean Gabin Film Festival at the American Cinematheque, here in Los Angeles, was so impressed by the actor's great 1954 gangster movie Touchez pas au grisbi, that she went home and immediately named her newly-acquired five-month-old pug "Grisbi!" (The word 'grisbi' is French slang, meaning 'loot,' and the film's title, Touchez pas au grisbi, translates, in English, as Hands Off the Loot.)


www.jeangabinbook.com
Posted by Charles Zigman at 4:10 PM No comments: 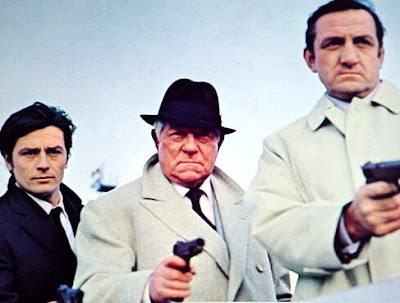 The crowd (almost sold-out the first night; almost three-quarters-full the second night) loved all four of the movies -- SICILIAN CLAN, MOONTIDE, LE PORT DU DESIR (HOUSE BY THE WATERFRONT), and TOUCHEZ PAS AU GRISBI, and a lot of people came up to me at the end of both evenings and asked me when the next Gabin Festival would be -- anyway, I hope to announce another one in the very near future.

I met a lot of people who told me some great Gabin Anecdotes that I didn't know about, and one lady (she looked to be about 90), who was bundled up in a fur coat and giant sunglasses, told me that she "met Gabin at Fox, in '42." One man told me that Gabin's 1970 action flick "La Horse" was released in the US (I didn't know it was) as "The Farm," but I haven't been able to check up on that tidbit yet... In fact, when Susan King interviewed me a couple of days before the festival for the Los Angeles Times, she told me that when she was a little girl, her parents took her to see a Doris Day movie called "The Glass Bottom Boat," and the co-feature it was released with -- back in the old days of 'double features' -- was "Melodie en sous-sol" ("Any Number Can Win"), and that she remembers entering the theater during the finale of that great Gabin/Delon picture.

All that, plus Helen Mirren was in the audience for Evening #2 (everybody saw her except for me, since 'this author' is completely oblivious to everything on earth), and I sold a lot of copies of WORLD'S COOLEST MOVIE STAR: THE COMPLETE 95 FILMS (AND LEGEND) OF JEAN GABIN.

Anyway -- that's all for now! Thanks to everybody who made WORLD'S COOLEST MOVIE STAR WEEKEND at the American Cinematheque a great success.

PS: I just read today that John Woo is developing a re-make of THE SICILIAN CLAN for 20th Century Fox -- the studio which made the original film.

www.jeangabinbook.com
Posted by Charles Zigman at 4:59 PM No comments:

Another Gabin Gem Makes Its Way to U.S. DVD!

Jean Gabin and Michele Morgan on the set of director Jean Gremillon's "Remorques" (1939/1941).

Last month I announced the arrival of two Gabin movies on DVD -- Gabin's 1942 film "Moontide," out via Fox Video, and director Max Ophuls' anthology/tryptych from 1952, "Le Plaisir," on Criterion.

Well, a third hard-to-find Gabin classic has just been released quietly via a smaller label: It's director Jean Gremillion's outstanding Remorques, the literal title of which is "Tugboats" and the US title of which is Stormy Waters. Directed by the vastly underrated Poetic Realist Jean Gremillon, Remorques was filmed in 1939, and released in France in 1941. (The reason for the delayed release is that, about 90% into the film's production, Gabin was conscripted into the French Navy and had to take a year off from completing his scenes.)

The harrowing, fantastic, and relatively unknown (in America) Remorques is the last of the dark/heart-rending Poetic Realist films pictures in which Gabin starred in the late '30s, the moody 'tragic drifter' period during which he also made Quai des brumes, La Bete humaine, and Le Jour se leve, which are similar to Remorques in tone -- and this one is equally as good. It re-teams Gabin with Michele Morgan for the third time, after 1938's Le Recif corail and 1939's Le Quai des brumes, and the ending is so haunting, it's one of those rare films where, when it's over, you won't be able to get up for a few minutes. It's that great.

In Remorques, Gabin plays a disillusioned (when is he not?) tugboat captain, who's thrown over his physically ill wife in favor of a fetching stranger, played by Michele Morgan (who wouldn't do that)?

The Video Yesteryear copy of Remorques is dubbed into English, it's shorter than the uncut French version (which is, in fact, better) and it hasn't been restored like many of Gabin's other films have -- but until the day that Remorques gets the Criterion treatment, if you're a Gabin completist, you'll definitely want to make this version of the picture a part of your collection.
Posted by Charles Zigman at 4:45 PM No comments: