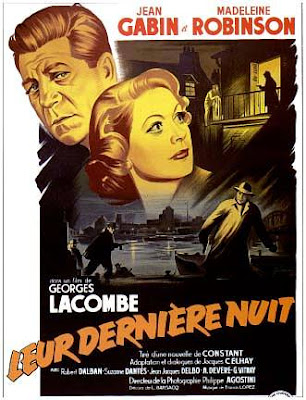 If you live long enough, everything happens:

This Thursday, August 18th, for the first time in the history of American television, a twenty-four hour/thirteen-film Jean Gabin Marathon is happening on Turner Classic Movies. When you see this great French actor's films, you will immediately understand why I spent more than ten years writing and researching a two-volume biography and filmography of Gabin, World’s Coolest Movie Star (www.jeangabinbook.com).

Turner Classic Movies has even designed a new, temporary Jean Gabin website, in honor of this historic day. The website reflects Gabin's boyhood interest in trains, as well as the fact that he had portrayed train engineers in two films, 1938's La Bete humaine (The Human Beast) and 1950's La Nuit est mon royaume (The Night is My Kingdom). If you click on the title of this article, you will be immediately whisked away to this website.

In America, Gabin – Europe’s #1 movie star of all time – is today principally known only for a small handful of movies: 1937’s double-header of La Grande illusion and Pepe Le Moko, 1938’s La Bete humaine, 1939’s Le Jour se leve, and 1954’s Touchez pas au grisbi. Those five films will be a part of TCM's Marathon, as well as seven additional Gabin films which have not been screened with English subtitles, or presented in America, since the 1950s, plus one title -- 1953's film noir thriller Leur derniere nuit (Their Last Night) -- which has never before had English subtitles and never been seen in America.

You should definitely plan on TiVo-ing all thirteen of these films, so you can watch them at your convenience. Each and every film is wonderful, and this, as you will see when you watch the films, is not hyperbole.

If you are new to the world of Jean Gabin, you might want to start with the acknowledged favorites, director Jean Renoir’s anti-war classic from 1937 Grand Illusion, and that same year’s Pepe Le Moko, Gabin’s gangster classic, which was also the basis for the famous line, “Come with me to the Casbah, we will make ze beautiful muzeek togezaire.” (Just as Cary Grant never actually said, "Judy, Judy, Judy," Gabin doesn't actually utter this line in Pepe Le Moko, although everybody thinks he did.) During the Second World War, Jean Gabin's French films were so popular in America, that Warner Bros. created its famous cartoon skunk, Pepe Le Pew, based on the actor's voice and likeness.

My personal favorite films in this one-day festival are director Jean Gremillon’s double-header of Gueule d’amour (1937) and Remorques (1941). Gremillon is one of France's finest directors yet, like his countryman Gabin, he continues to be mostly unknown in the U.S. Jean Gabin is famously stoic in his films, but in his two Gremillon entries, he is decidedly "un-stoic." The festival is great because you get to see Gabin in his pre-World War II films, in which he typically plays young tragic drifter, and his later, 1950s films, in which he portrays wizened gentleman-gangsters.

I am currently re-writing, re-editing, and revising my book about Jean Gabin for a possible new, 2012 edition -- I have been re-visiting many of the films recently, and rewriting many chapters from scratch -- and I will let you know, on this blogsite, when it is available. (The edition of the book which you can currently purchase on Amazon.com and Barnesandnoble.com is the most current, 2009 printing. You can't pre-order the new edition yet, because I'm still writing it!)

Thank you again for your interest in film history's greatest actor, Jean Gabin.

Scroll down, and you will find TCM'S Jean Gabin Schedule for Thursday August 18th in both Pacific Standard Time (PST) and Eastern Standard Time (EST). If you’re on something offbeat and perverse like “mountain time,” you’ll have to figure it out for yourself, because there is absolutely no way human beings can ever estimate or calibrate something that arcane.

8:00 AM PST
11:00 AM EST
L' AIR DE PARIS (THE AIR OF PARIS) (1954)
AMERICAN TELEVISION PREMIERE.
NOT SCREENED IN THE U.S. IN MORE THAN FIFTY YEARS.
An over-the-hill boxer stakes his fortune on training a young railroad-worker. This film re-teams Gabin, for the first time in fifteen years, with Marcel Carne, who had previously directed him in Le Quai des brumes and Le Jour se leve.
Dir: Marcel Carne.
Cast: Jean Gabin, Arletty, Roland Lesaffre.
BW-104 mins.

In the 1950s, it was difficult for the great African-American songstress Hazel Scott to obtain film roles in her home-country of America, so Gabin, a major fan of Scott's, personally invited her to portray a lounge singer in his film noir masterwork, Le Desordre et la nuit. (Twenty-four years earlier, Gabin had extended the same offer to another legendary African-American entertainer, Josephine Baker, who appeared with him in 1934's Zouzou.)

"Come with me to the Casbah..." Pepe Le Moko, starring Jean Gabin, is one of the most atmospheric, and purely enjoyable, films ever made. Gabin even sings in the film!

Here is director Jean Renoir, telling American audiences, in English, about his film Grand Illusion, for the film's North American re-release in the 1960s. Grand Illusion is part of the American Film Institute's list of the Best 100 Films Ever Made. Orson Welles once told Dick Cavett that if only one film could be saved for posterity, it would be Grand Illusion. 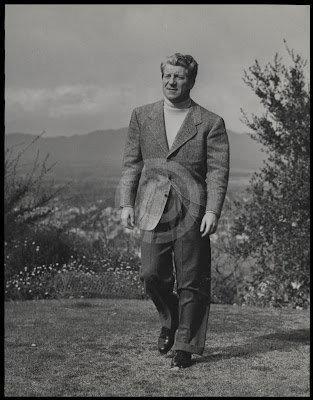 During the Second World War, Jean Gabin lived briefly (1941-1943) in Los Angeles. Here is a portrait, photographed in Laurel Canyon.

Posted by Charles Zigman at 5:32 PM No comments: