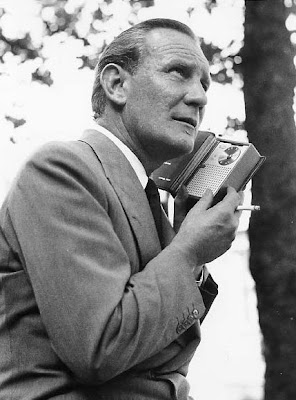 
Part of the joy of maintaining this blogsite – which, I admit, I don’t do as much as I should – includes the fact that, on occasion, I receive very nice fan mail for my two-volume filmography/biography, World’s Coolest Movie Star: The Complete 95 Films (and Legend) of Jean Gabin (www.jeangabinbook.com) – of course, World's Coolest Movie Star is the very first English-language book about France’s greatest film actor. Even better, sometimes a reader of my book will relate to me an anecdote about Gabin with which I had been previously unfamiliar.

Yesterday, I was delighted to receive just such an email from Michael Pointon, a television producer who, back in the 1980s, interviewed one of the greatest of all British film stars – the legendary Trevor Howard, who will be familiar to you from such films as Noel Coward’s Brief Encounter (1945) and Lewis Milestone's Mutiny on the Bounty (1962).

In his email, Pointon illuminates me as to a meeting between Trevor Howard and Jean Gabin, which transpired in Paris. I was not aware that these two fine thespians had ever met, so I thank Mr. Pointon for sending me the email.

Here is that email:

I am enjoying your comprehensive, meticulously-researched and warmly enthusiastic Jean Gabin book. I have been a follower of Gabin’s work for many years, and such a work is long-overdue.

It's clearly a labor of love on your part, and I have an anecdote you may not have heard that might be of use.

I have worked in radio and television documentaries for many years, and one of my assignments, in the early ‘80s, was to interview Trevor Howard, who is probably Britain's finest screen actor.

After asking Howard all of the usual questions and talking with him about his long career, I decided to ask him who his favorite cinema actors were. He instantly named Spencer Tracy and Jean Gabin, two actors to whom his own work had been compared.

Howard was a remarkably reserved man and it had taken a long time for me to persuade him to consent to an interview – probably something he had in common with Gabin. I never thought of asking if he'd actually met Gabin so, to my surprise, some years after his death, one of his biographers wrote of an encounter between Howard and Gabin which has the ring of truth: It seems that Howard was in Paris to publicize a movie he'd made and, as was his wont, he was drinking in a bistro with the film’s producer. Suddenly, to his surprise, a trenchcoat-wearing man crossed the darkened room towards his table, thrust his hand towards Howard, and introduced himself by name, very simply: “Gabin.” Howard stood up in surprise, grasped the outstretched hand, and replied, just as simply, “Howard.” Apparently Jean Gabin and Trevor Howard embraced and left the bistro together – and the producer of Howard’s film didn't see him again for another two days!

Somehow this feels true and, in fact, Howard’s producer related the incident to author Terence Pettigrew. This anecdote is referenced in Pettigrew’s book, TREVOR HOWARD: A PERSONAL BIOGRAPHY... 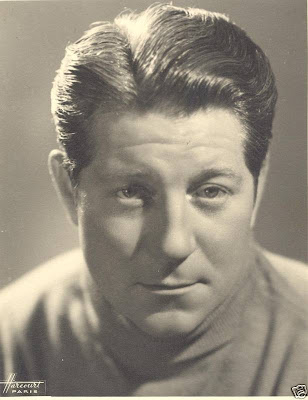 
World’s Coolest Movie Star: The Complete 95 Films (and Legend) of Jean Gabin, Volumes One and Two, is available at Amazon.com, Barnes and Noble.com, and it may also be ordered at a bookseller near you. You may take 40% off the book at Barnes and Noble.com between now and February 10, 2010, when you enter coupon code U4C7L7Y at checkout. (Barnes and Noble is offering the book at 10% off already, so this coupon code entitles you to an extra 30% off. You can only get the discount on one book per order, so to get the discount on each of the two volumes, simply place two orders. These books are postpaid.)
Posted by Charles Zigman at 7:26 PM No comments: