It's 5:30pm and, per Gabby Hayes in some western I saw once, I'm a mite peckish... and so, being the author of a (giant/two-volume) book about Jean Gabin, I started to wonder: What were Jean Gabin's favorite foods?

I asked Corinne Marchal, webmaster of the Gabin Musee (Gabin Museum) in Meriel, France. Ms. Marchal visited Los Angeles in July, and she told me that Jean Gabin's favorite foods were:

-- beans prepared with mutton (apparently, this was his favorite dish);
-- pot-au-feu, which, for lowbrow people like me who aren't chefs, is a French boiled beef-and-vegetable plate, similar to America's favorite hearty gustable "stew," although unlike stew, the beef and vegetables (carrots, celery, turnips, leeks)are usually placed separately on the plate. When Gabin lived with Marlene Dietrich, in France and in the U.S., they apparently used to have a lot of fun preparing pot-au-feu together;
-- fish (he liked it a lot);
-- roquefort cheese, spread with butter and served with Worcester sauce (!);
-- gruyère cheese dipped in mustard (!!);
-- also, Jean Gabin liked to add red wine into his soup, which people of his generation sometimes did. In French, the act of adding wine into one's soup, to increase the flavor, is called "do chabrot."

But 'man' (aka, Gabin) doesn't live on bread (and mutton, and roquefort cheese, and wine-soup) alone. One has to be able to wash it all down with something, and the World's Coolest Movie Star was a big-time connoisseur of whiskey, annisette (a sweet liqueur), and a very dry/acidic white wine called 'gros plant;' not only did he love to consume this wine, which comes from Nantes, in western France's Loire River Valley, but he liked the name of it, because 'gros plant' reminded him of the cinematic term 'gros plan' which means 'close-up.' 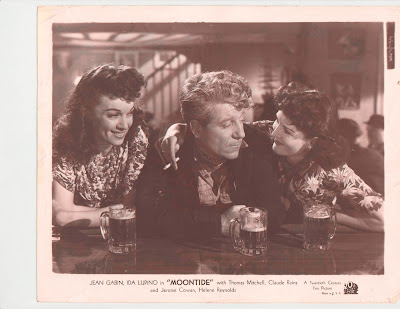 Also: If you're not already a member of the American Cinematheque, please consider it. Not only is a membership tax deductible, but you get to see great movies where they're supposed to be -- on the big screen. http://americancinematheque.com/amcinebiz/jointhe.htm
Posted by Charles Zigman at 8:50 AM No comments:

Eastbound and Down: Jean Gabin Played a Trucker in Two Movies!

When you think about the great French movie star Jean Gabin, you think about the tragic drifter characters he used to play when he was La Bete humaine, or the smooth, white-haired patriarchs and gentleman-gangsters he often played when young, in movies like Quai des brumes, Le jour se leve, and La bete humaine, and he was older (in movies like Touchez pas au grisbi).

But did you know that Jean Gabin played a steely TRUCKER in two movies that were made in 1955 and 1956? If you're American, you don't, because neither of these two great movies were ever released in the United States, but if you're French, you know both of the films very well.

In 1956's Gas-Oil, Gabin plays trucker Jean Chape. When he accidentally runs over a man who's already dead, it turns out that the corpse was actually worth millions, and that a team of surly gangsters think, erroneously, that Chape has stolen the money off of the body. So they're after him. It's a really great movie, and it's the second and final time in which Gabin would appear opposite Jeanne Moreau, who appeared with him, the year before, in director Jacques Becker's Touches pas au grisbi. (In Grisbi, Moreau has a supporting role, but she's the female lead in Gas-Oil.)

In 1956's Des gens sans importance, Gabin is another fifty year old trucker; this time, we get a very smart movie about ageism, in which trucker Gabin falls in love with a woman thirty years his junior -- much to the detriment of his long (and unhappy) marriage. Henri Verneuil directed this great movie, which features a sublime harmonica score by Jean Weiner.

Maybe one of these days The Criterion Collection (or somebody!) will subtitle these two seminal Gabin works into English and releae them on DVD as a Trucker Gabin double feature. Until the day that happens, I'll continue to report to you, when I can, on other great Jean Gabin movies which were never subtitled into English, nor released in the United States.

Read about all of Jean Gabin's 95 movies in my book WORLD'S COOLEST MOVIE STAR: THE COMPLETE 95 FILMS (AND LEGEND) OF JEAN GABIN, VOLUMES ONE AND TWO, which may be ordered from www.jeangabinbook.com.
Posted by Charles Zigman at 7:58 AM No comments: It's been awhile since I put in a plug for my new, two-volume book WORLD'S COOLEST MOVIE STAR: THE COMPLETE 95 FILMS (AND LEGEND) OF JEAN GABIN, so don't forget to order your copy now! Head over to www.jeangabinbook.com for details.
Posted by Charles Zigman at 7:23 AM No comments: