On that date, which would have been Jean Gabin's 104th birthday, family and friends of the great screen icon gathered in Montmartre at 11:30am, where a previously unnamed town square was christened as the "Place Jean Gabin."

Since I'm in Los Angeles, I was not present at the event. But Corinne Marchal from the Musee Gabin in Meriel emailed me some photographs from the big event, and so did my good friends, Laurence Bardet and Jean-Paul Danton.

In the photos, you will see Gabin's daughter Florence and son Mathias (with his white hair, he's a doppelganger for his father!), as well as Mathias' son, Alexis (dark hair, with cigarette), and some other famous faces.

When in Montmartre, visit the Place Jean Gabin. It's near the rue Lambert and the rue Custine, and it's west of the Sacre-Coeur cathedral. 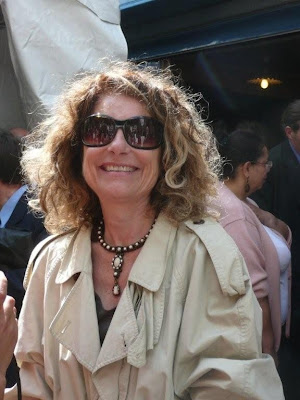 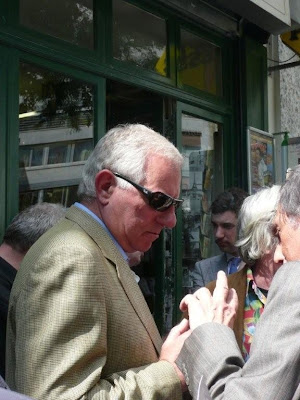 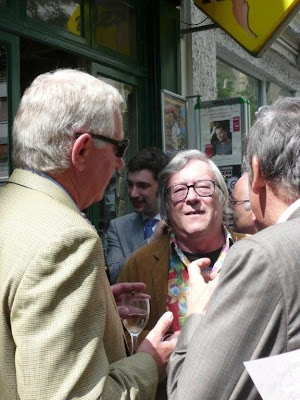 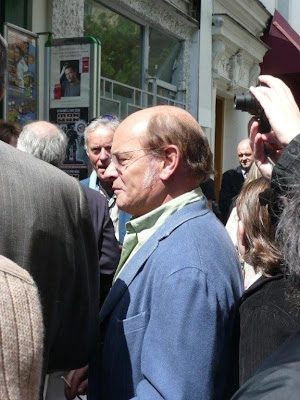 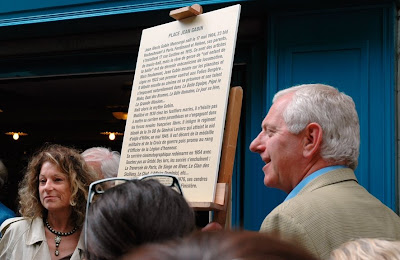 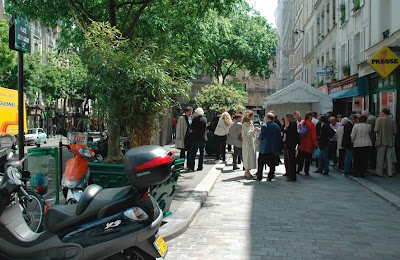 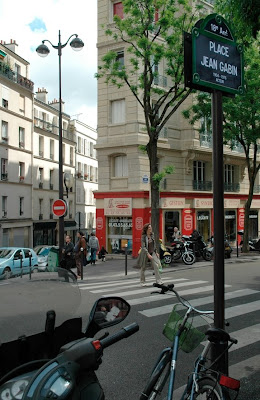 Posted by Charles Zigman at 9:27 AM No comments:

Just like the French and the Americans, the Japanese, too, have always made great movies about Iconic Loners, which is why the Japanese continue to respond to Jean Gabin, even today.

In Japan, of course, ‘The Loner’ usually appears in the form of the silent, world-weary samurai, a guy who, just like Gabin’s ‘tragic drifters’ of the 1930s, is forever traversing the eternal plains, battling enemies who seem to pop-up out of the dunes like so many psychotic whack-a-moles, while occasionally ‘scoring with the hot geisha chicks!’ (Zatoichi: The Blind Swordsman, Hanzo the Razor, the Baby Cart Series, and Seven Samurai are all great Japanese Samurai Movies which feature mega-cool loners at their (soft)-centers.

On-screen movie Samurai-characters, just like Jean Gabin’s on-screen characters, concern themselves neither with victory nor defeat, but only with their own survival, as they walk the arid landscapes, plunging both inevitably and irrevocably toward their own Cruel Fates (which consist, usually, of imprisonment, death, or [even worse], ‘walking away, alone,’ a phenomenon which, in a Gabin movie, is even worse than death)! Indeed, when you read the Samurai (or, ‘Bushido’) Code, as it was articulated in the 9th-century, what you’re pretty much reading, is an encapsulation of Jean Gabin’s world’s famous ‘1934-to-‘41/tragic-drifter’ movie persona, and yet it was written eight centuries before Jean Gabin was even born!

THE BUSHIDO CODE OF THE SAMURAI (Japan, 9th Century):

www.jeangabinbook.com
Posted by Charles Zigman at 4:19 PM No comments:

JULY 20, 2008: THE FIRST EVER ENGLISH-LANGUAGE BOOKS ABOUT FRENCH MOVIE LEGEND/ICON JEAN GABIN ARE ON THE WAY!!! FIRST EVER ENGLISH LANGUAGE BOOKS ABOUT JEAN GABIN ARE ON THE WAY!
By Charles Zigman

France. Germany. Italy. Russia. Poland. Czech Republic. Romania. Mexico. Japan. Iran. All over the world -- everywhere except in the U.S. -- the legendary Jean Gabin continues to be considered one of the greatest movie stars of all time.


In the U.S., Gabin is definitely considered to be a cult figure (in 2002, twin Gabin festivals were presented at the Los Angeles County Museum of Art, and at the Walter Reade Theatres in New York), but for the vast moviegoing public, and just like a lot of the greats, he's fallen off of the radar.


That's about to change, however, because on July 20, 2008, Allenwood Press presents the very first English-language (and two-volume) book about Jean Gabin, ever. (There's not even an old, out-of-print book about Gabin in English, if you can believe that!) It's WORLD'S COOLEST MOVIE STAR: THE COMPLETE 95 FILMS (AND LEGEND) OF JEAN GABIN by CHARLES ZIGMAN.


VOLUME ONE (ISBN #978-0-9799722-0-1) which has been subtitled "Tragic Drifter," takes us through Gabin's first forty-six films, including the internationally renowned "Grand Illusion," "Pepe Le Moko," "Le Quai des brumes," and "Le Jour se leve," a period spanning the years 1930 to 1953, during which time he played movie history's most famous tragic drifter. During the 1930s and 1940s, Gabin's popularity in the U.S. nearly eclipsed that of Bogart, James Cagney, and Bette Davis. (Ever heard anybody say, "Come with me to the Casbah. We will make ze beautiful muzeek togezaire?" It was famously attributed to the character Jean Gabin portrayed in the 1937 gangster classic "Pepe Le Moko," even though he never actually uttered those words. In fact Gabin's 'Pepe' character even inspired Warner Bros. to create its legendary cartoon skunk, Pepe Le Pew, whose looks and voice were modeled on the actor.)

VOLUME TWO (ISBN #978-0-9799722-1-8) which has been subtitled "Comeback/Patriarch," covers Films 47 through 95, which Gabin made between 1954 and 1976. During this period of his career, instead of playing his famous tragic drifter character, he played a series of mega-cool gentleman-criminals, and world-weary (yet life-loving) patriarchs, and he even turned out some hilarious comedies during this period, which are criminally unknown in the U.S. The tone of the book is "fun," as opposed to "academic" and "pretentious," and its goal, is to introduce as many people as possible to the films of Gabin; to that end, this book is loaded with rare photographs, many of which have never appeared even in previously published French-language books about Gabin.


The tone of the book is "fun," as opposed to "academic" and "pretentious," and its goal is to introduce as many people as possible to the films of Gabin; to that end, it's loaded with rare photographs, many of which have never appeared even in previously published French-language books about Gabin. This is a book for Jean Gabin 'newbies' and 'completists' both: For the uninitiated, there are some biography and 'intro' chapters, which place Gabin, and his famous big-screen persona into perspective. For the completists, author Charles Zigman has unpacked every single one of Jean Gabin's ninety-five theatrical feature films -- even the more than fifty pictures which have never been subtitled into English before -- so that one can feel, by poring through the chapters, that one is actually 'seeing' the films, firsthand. Excerpts from newspapers written 'back in the day,' both in the U.S. and in Europe, demonstrate how prominent movie critics received Gabin's pictures the day they were first released, in the 1930s through the 1970s.


In short this two-volume book is for everybody. Besides being the first books about Jean Gabin in the English language ever, WORLD'S COOLEST MOVIE STAR is also a first because it is the very first 'filmography book' related to Gabin, in any language: Even in France, where there have been many published biographies of Jean Gabin, there has never been a book concentrating, in great detail on each of the actor's ninety-five films. The legendary actress Michele Morgan, who appeared with Gabin in five feature films, has written the foreword to Volume One. Brigitte Bardot, who considered Gabin to be her mentor, has supplied the original foreword to Volume Two.

If you know anybody who likes old movies, or if you want to give a couple of great "gift books," tell them that WORLD'S COOLEST MOVIE STAR: THE COMPLETE 95 FILMS (AND LEGEND) OF JEAN GABIN is on the way!

Each volume is sold separately.

Pre-order now in the US from Amazon.com, Barnes and Noble.com, and Borders.com. Posted by Charles Zigman at 3:50 PM No comments: