Give Jean Gabin for Mother's Day... and Save 50% (at Barnes and Noble.com)

If you wanted to buy author Charles Zigman's two-volume book WORLD'S COOLEST MOVIE STAR: THE COMPLETE 95 FILMS (AND LEGEND) OF JEAN GABIN, but you felt that the cost was too prohibitive, here's some good news for you.

But between now and May 10, 2010, if you're a paid member of Barnes and Noble's Book Club, with an up-to-date membership number on your B&N membership card, each of the two volumes is only $19.97, when you buy on line at www.barnesandnoble.com. 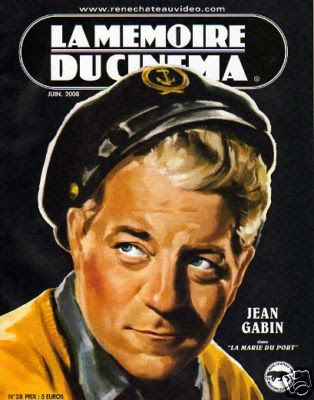 Here's how the 50% discount breaks down:

Each of the two volumes of WORLD'S COOLEST MOVIE STAR retails at $39.95.

If you're a currently-enrolled member of Barnes and Noble's Book Club, and you enter Coupon Code D7P3D8K during the on-line checkout process, Barnes and Noble.com will lower the price by an additional 40%, bringing the cost of each volume all the way down to $19.97. When you buy both volumes you're saving about $40.00.

If you already own Volume One, and you haven't yet purchased Volume Two, this fifty- percent discount might hopefully be some extra incentive. If you don't own either of the two volumes yet, this is the best time of all to get them.

Barnes and Noble.com is also providing free postage on the books.

Jean Gabin, star of La Grande illusion and Pepe Le Moko, has always been considered to be one of Europe's greatest movie stars -- a true giant in cinema, his importance, in Europe, commensurate with that of Humphrey Bogart or Spencer Tracy. (In fact, Gabin has been called 'The French Bogart' and 'The French Tracy.') While Gabin has always had an incredible cult following in America, true stardom has eluded him here. Hopefully, this book will redress the balance.

(PS, Barnes and Noble will only let its members take the discount on one book per order, so to order the two volumes, please place two separate orders.)
Posted by Charles Zigman at 9:57 AM No comments: