The website Ouest-France (www.ouest-france.fr) reported on January 20th, 2010 that forty-four students in Mordelles, France (in Brittany, in the northwest) at the private L'Immaculée high school had some very good fortune on Tuesday the 19th: Their guest speaker was Florence Moncorgé-Gabin, a great filmmaker and author who also happens to be one of the two daughters of the legendary French movie actor, Jean Gabin.

Florence Moncorgé-Gabin, who began as a script-girl on a number of films in the '70s and '80s, including her father's final film, 1976's L'Année sainte , directed her own feature film in 2008, the heart-wrenching pastoral epic Le Passager de l'été ( The Passenger of the Summer.)

Moncorgé spent the afternoon inculcating the students, in the Cinema and Literature course, with a love of great French films which are thematically similar to her own film, director Claude Berri's 1986 film adaptations of Marcel Pagnol's Jean de Florette and Manon des sources. As she told the journalist from Ouest-France, "Hopefully, watching these films will motivate the students to experience and appreciate [other relevant] authors like Victor Hugo, Emile Zola, and Alexandre Dumas." The students were apparently taken by Ms. Moncorgé-Gabin's friendliness and accessibility, a hallmark of her father's on-screen persona.

Florence Moncorgé-Gabin has written two books about her father, 2002's Quitte à avoir un père, autant qu'il s'appelle Gabin (If You Have to Have a Father, It Might as Well Be Gabin) and 2004's Gabin hors champ (Gabin, Off-Camera), co-written with her brother, Mathias Moncorge. 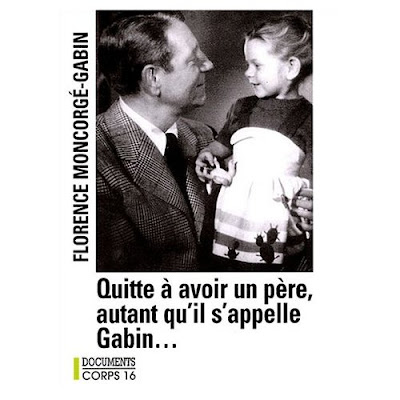 Ms. Moncorgé's 2002 book, a memory of what it was like to be Jean Gabin's daughter. The English language translation of the book's French title is, If You Have to Have a Father, It Might As Well Be Gabin.


Lionsgate films has made Ms. Moncorgé-Gabin's film, Le Passager de l'été, available for you to watch on-line right now, with English subtitles, at Amazon.com, as a digital download ONLY. You can download the film for one day for $2.99, or you can download it and keep it forever for $9.99. Click on the title of this article and it will take you directly to the Amazon.com page to watch the film. Unfortunately, downloading is the only way to watch the film, at present, with English subtitles; there is no DVD to buy.
Posted by Charles Zigman at 6:35 PM No comments: 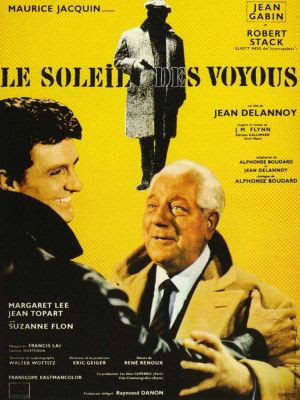 Jean Gabin and Robert Stack in the fun 1966 heist thriller Action Man (Le Soleil des voyous). It will be available on DVD, in North America, on January 26, 2010.

Happy New Year from www.jeangabinbook.com. Thank you to everybody who gave (and received) my book, WORLD'S COOLEST MOVIE STAR: THE COMPLETE 95 FILMS (AND LEGEND) OF JEAN GABIN, VOLUMES ONE AND TWO, for the holidays.

2010 starts out with a brand new Jean Gabin DVD release, available in an English languge version for the first time on home video:

I'm pleased to announce that this fun Technicolor thriller is pure fun for fans of Jean Gabin, Robert Stack, as well as for anybody who enjoys great heist movies. In Action Man, Gabin and Stack heist a military payroll with tragic results for one of the two stars, but I won't reveal which one until you catch the movie.

Le Soleil des voyous (Action Man) is one of the six films which Delannoy, a distant French cousin of Franklin Delano Roosevelt, directed with his friend Jean Gabin in the lead. A literal English translation of the title Le Soleil des voyous is something like, "Sun Over the No-Goods." You can see why the American distributors re-titled it, Action Man!

Action Man, at this point, will only be available on DVD as part of a two-DVD/four movie set issued by VCI Entertainment, which VCI has entitled, "The Action Man Collection." The other three features in the set, none of which I have yet seen, do NOT have Gabin in them. The other three titles in the package are:

As far as I can tell, the print of Action Man which will be available in this package will be dubbed into English; normally, like any serious cineaste, I prefer subtitles over dubbing, but I actually saw this English-dubbed version in 2004when I began researching my Jean Gabin book (UCLA had/has a 16-millimeter print in its Film Archives), and I remember the dubbing as being quite acceptable, bordering on very, very good. Jean Gabin is one of those actors for whom the voice is a big part of the persona, but, from what I remember, whoever dubbed his voice into English did a serviceable job. 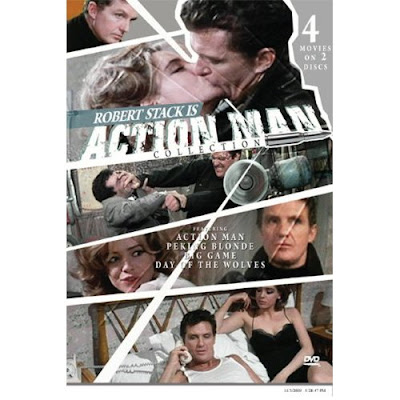 Even though Jean Gabin is the first-billed star of Action Man, VCI Entertainment, distributors of the U.S. DVD, neglected to put his picture on the box; this is understandable, however, in view of the fact that Gabin is less known in America than Robert Stack.

I have never seen the French-language print of Action Man, but I would love to, because, famously, Stack did all of his dialogue in French; Robert Stack, as I have mentioned in my Jean Gabin book, grew up on military bases throughout France, so he spoke the language fluently. Here is a five minute clip from the French print of Le Soleil des voyous/Action Man. About four-and-a-half minutes in, you will hear Stack speaking fluent French:

The mob sends thug Robert Stack to bust up Jean Gabin's bar/restaurant in Action Man (1966). When Stack arrives, he is surprised to find that the bar is owned by his good friend and war-buddy Gabin -- the American and the Frenchman fought together in Indochina, in the '50s! It won't be long before Gabin and Stack are teaming up, to get the goods on the mob.


In fact, here is a six minute interview Stack gave to French television in 1966, in which he expresses his great admiration for Jean Gabin. More of Stack speaking French:


I am looking forward to reporting on more Jean Gabin news and events in 2010, as well as telling you about my new projects.