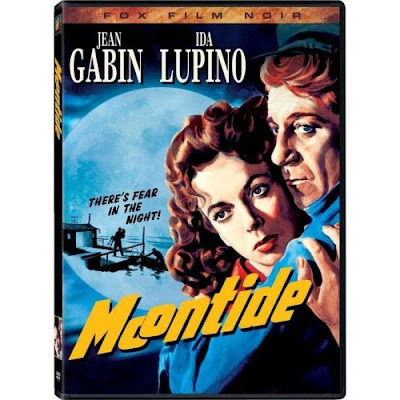 Jean Gabin made ninety-five movies during a career which spanned forty-six years -- between 1930 and 1976.


93 of his movies were filmed in Europe (France, mostly; a few in Italy), and in these movies, Gabin always spoke his dialogue in his native French.


But during World War II, when the Nazis invaded France, many French film professionals moved to the U.S. in order to continue their film careers -- including Jean Gabin.


Gabin starred in two great movies in America, neither of which have ever been released on American home video. The second of the two films, Universal's Impostor, is an up-to-the minute look at the Free French Army battling in the Belgian Congo (with the San Fernando Valley's Toluca Lake doubling for the Congo)!

Gabin's first American film though, Moontide, is an incredible Film Noir that's credited to director Archie Mayo, but which was also partially directed by Fritz Lang -- and additionally, it features a hypnotic "drunk" sequence that was actually helmed by Salvador Dali.

This film, alone, is really the reason that I first decided to write my book WORLD'S COOLEST MOVIE STAR: THE COMPLETE 95 FILMS (AND LEGEND) OF JEAN GABIN. When I was a kid, family members gushed about how great this movie was -- and when I saw it for myself, I found out why. It's a great Lost American Classic, and one which, without any exaggeration, most definitely belongs in that great pantheon of Great American 1940's films which include Casablanca, Gilda, Grapes of Wrath, etc. Not a big hit in its own time, the vastly entertaining Moontide is a film which really begs to be rediscovered. And now it will:


On September 2, 2008, Moontide comes to DVD, here in the U.S., for the very first time. It's being offered in a beautifully restored version via Fox Video, and it's a must have for any Gabin Fan, or for any Film Noir lover.

The DVD features commentary by the sharp-eyed Film Noir historian Eddie Muller, and apparently, it also contains a newly-discovered original featurette about the film, which was produced in conjunction with with the film's initial 1942 release.

Jean Gabin's co-star in the film is Ida Lupino, and Fox Video will also be issuing a second Lupino thriller, the seminal Noir Roadhouse, in which she co-stars with Richard Widmark, on September 2nd, as well.


You can pre-order Moontide now, from Amazon.com.

... And don't forget to buy my book WORLD'S COOLEST MOVIE STAR: THE COMPLETE 95 FILMS (AND LEGEND) OF JEAN GABIN, VOLUME ONE and VOLUME TWO (http://www.jeangabinbook.com/).
Posted by Charles Zigman at 11:34 AM