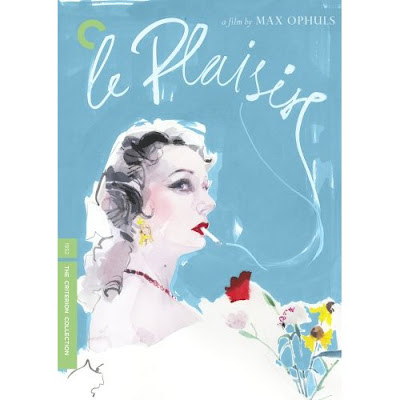 A few days ago, I reported that Jean Gabin's 1942 movie "Moontide" -- one of only two American films in which he starred during his entire career -- will finally be released on DVD, in the US, on September 2nd.

The news just got better, though, because it was announced today that a second Jean Gabin movie will be making it to U.S. DVD this fall! On the sixteenth of September, the Criterion Collection will be releasing one of Gabin's great 1952 classics, "Le Plaisir" on DVD, in a newly restored version. ("Moontide" has never existed on home video before in any country, in any format; "Le Plaisir" has only been available in the US as an old, murky/washed-out-looking VHS tape.)

"Le Plaisir" is a 'different' kind of movie for Gabin. During this stage in his career, when he was bit older, the actor was typically playing smooth gentleman-gangsters in movies like 1954's "Touchez pas au grisbi." But in "Le Plaisir," he's a simple country farmer.

It's an anthology film featuring three stories, and Gabin appears only in the third and longest story, although all three stories, which are based on the stories of Guy de Maupassant, are good. While Gabin is usually very stoic in his movies, in "Le Plaisir," he's atypically cheerful throughout, and frequently, he's even smiley -- and he does a great job.

"Le Plaisir" represents the only time that Gabin ever thesped under the auspicies of the French, German-born filmmaker Max Ophuls. Ophuls, like Fellini, makes films which celebrate 'the whimsical pageantry of every day life,' kind of like Fellini's movies do; I guess the difference between Ophuls and Fellini, for me, is that Ophuls films are more naturalistic while Fellini's are visually very stylized.

Some other noteworthy Max Ophuls movies besides "Le Plaisir," are 1950's "La Ronde," 1953's "The Earrings of Madame D'," and 1955's "Lola Montez," and each of these titles is worth checking out. In fact, conviently for admirers of classic French cinema, Criterion will be releasing DVDs of "La Ronde" and "Earrings" on 9/16 as well.

So this fall we've got two new Jean Gabin movies being released on DVD in the US, both of them for the very first time: Fox's restoration of "Moontide" hits video stores on September 2nd, and the Criterion Collection's presentation of "Le Plaisir" takes its bow on September 16th. And of course, my two-volume book, WORLD'S COOLEST MOVIE STAR: THE COMPLETE 95 FILMS (AND LEGEND) OF JEAN GABIN, VOLUMES ONE AND TWO was released two days ago, on Sunday July 20th. I hope this is the year that Jean Gabin will really conquer America!