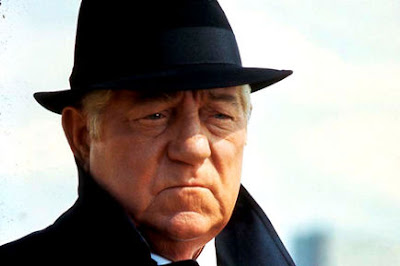 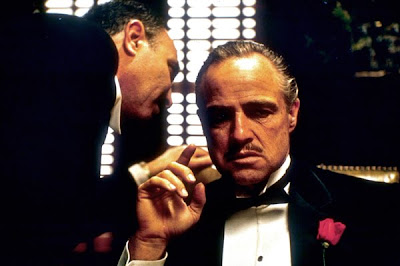 Here's a "new" revelation about Jean Gabin that I just learned about, courtesy of Professor Philp Horne's new article in the London Daily Telegraph:

I already knew, from watching the documentary featurettes which appear on the recent Blu-Ray release of The Godfather, that Francis Ford Coppola wanted Marlon Brando to play Don Vito Corleone, and that Paramount was constantly fighting him on the idea, and suggesting other actors. I didn't know, however, that Jean Gabin was on the movie studio's short list to play movie history's greatest mafioso patriarch.

Of course, it makes sense: During this period of his career, Jean Gabin had made a habit of playing level-headed, white-haired crime family patriarchs. In 1969's crackerjack suspense thriller The Sicilian Clan, directed by Henri Verneuil, Gabin even played a Mafia Don -- Don Vittorio Manalese.


Here is Professor Horne's illuminating new article about The Godfather, featuring a mention of Jean Gabin.

THE GODFATHER: 'NOBODY ENJOYED ONE DAY OF IT'
Just like the film, the making of 'The Godfather’ was an ugly story of fear and dysfunction.
By Philip Horne
London Daily Telegraph, September 22, 2009

"What was the formula that made The Godfather one of the most successful films of all time? Surely it would take an unusually harmonious combination of talents working in concert, a rare balance of commercial entertainment and artistic challenge, a run of luck those involved couldn’t miss.

"The Godfather... was nominated for 11 Oscars, winning three, and on its $6 million budget, [it] grossed $101 million for Paramount within 18 weeks on release.

"'It was the most miserable film I can think of to make,' declares its producer, Al Ruddy. “Nobody enjoyed one day of it.” Coppola agrees: 'It was just non-stop anxiety and wondering when I was going to get fired.' The novel by Mario Puzo could easily not have been written: eight publishers passed on the outline for a would-be best-seller pitched by a middle-ranking, mid-forties writer with a bad gambling habit and big debts. Only bumping into a friend had led to his actually writing The Godfather. Its 67 weeks topping the New York Times best-seller list surprised everyone.

"Paramount bought an option when Puzo had only written 100 pages, for a mere $12,500, rising to $50,000 if the novel was filmed. But maybe – if we’re to credit Paramount’s head of production Robert Evans – Paramount very nearly didn’t acquire it. There was a bidding war: they were 'one day away from Burt Lancaster buying The Godfather, and Burt wanted to play the Don.'

"Coppola was no one’s first choice. A pack of others were considered: Arthur Penn, Peter Yates, Costa-Gavras, Otto Preminger, Richard Brooks, Elia Kazan, Fred Zinnemann, Franklin J Schaffner, Richard Lester… All said no. Finally, Evans decided Mafia movies hadn’t worked because, 'they were usually written by Jews, directed by Jews and acted by Jews' – and the only Italian-American director with any track record was the up-and-coming Coppola. He almost said no, too, thinking Puzo’s opus 'a popular, sensational novel, pretty cheap stuff.'

"But Coppola relented, partly because his company American Zoetrope was broke. Once aboard, he saw in this blockbuster the profound story of 'a king, almost Greek – a king with three sons.' Puzo liked him. Henceforth, though, everything was a fight. The studio wanted to keep costs down by setting the film in present-day Kansas City; Coppola refused, demanding and getting a $5 million budget. He demanded an 80 day shooting schedule; Paramount gave him only 53.

"Then there was the question of who would play Don Vito Corleone? Paramount had sounded out Anthony Quinn; but also on their list were Laurence Olivier – who was ill – George C Scott, Jean Gabin, Vittorio De Sica, John Huston, Paul Scofield, Victor Mature… Coppola wanted Marlon Brando, whose name was then dirt with the studios due to unreliability and a string of flops. Paramount president Stan Jaffe declared, 'Marlon Brando will never appear in this picture,' even forbidding further discussion. But Coppola pleaded to the bosses that Brando was the greatest living screen actor, and finally, extravagantly, collapsed on the carpet before their eyes. They thought he’d had a heart attack brought on by an excess of sincerity and gave in, though on tough terms.

"The rest of the casting was problematic, too. Paramount wanted Robert Redford or Ryan O’Neal as Michael, the Don’s son; happily the Redford deal fell through. Rod Steiger wanted to do it. Warren Beatty turned it down. Martin Sheen, David Carradine and Dean Stockwell were considered. Even Robert De Niro tested for it: the footage that survives is remarkable. Only Coppola saw Al Pacino’s depths; casting director Fred Roos found him 'this sort of runty little guy.' Coppola prevailed. Pacino was paid only $35,000, but came through.

"James Caan, already a name, was tested for Michael, but was best suited for the part he got, Sonny. John Cazale as Fredo was perfect. For Robert Duvall’s part as the consigliere Tom Hagen, both John Cassavetes and Peter Falk approached Coppola. Coppola objected to casting his sister, Talia Shire, as Connie Corleone, yelling at their mother that Shire was too pretty. But she stayed in, and it became a family film: he eventually included his parents, and even his three-week-old daughter, Sofia.

"The shoot itself was a nightmare. 'My history with The Godfather was very much the history of someone in trouble,' says Coppola. He knew early on 'they were not happy with what I had done…,' and expected to be fired at any moment. In the men’s room he heard crew members talking: about the film – 'What a piece of junk!;' and about him – 'This guy doesn’t know what he’s doing.' Coppola was constantly undermined. Indeed, Elia Kazan was lined up as a possible replacement. Coppola 'kept dreaming that Kazan would arrive on the set and would say to me, 'Uh, Francis, I’ve been asked to…’' But Brando nobly said he would walk off the picture if Coppola was fired. Pacino, too, expected the boot: 'I always felt that I still had to win these people over.' He was convinced 'I was out – and then the Sollozzo scene came.' They loved his intensity as he takes bloody revenge in that great sequence in the restaurant.

"Brando came good. Coppola notes that 'without exception, every one of his crazy ideas I used turned out to be a terrific moment.'

"Coppola wanted to fill the film with 'hundreds and hundreds of interesting specifics,' one example being the cat Brando cradles in the first scene. It wandered onto the set, Coppola befriended it and settled it on Brando’s lap.

"Finally, there’s the length. Coppola chopped it down, on Paramount’s strict instructions, to a paltry 135 minutes (for exhibitors’ convenience). Then, Evans says, he himself turned on Coppola: 'You shot a saga, and you turned in a trailer. Now give me a movie.' The film was restored to its nearly three hours, and the rest is history – and movie legend."

Philip Horne teaches literature and film in the Department of English at University College London
Posted by Charles Zigman at 7:53 PM