Don't "Come with me to the Casbah:" On the Getty Center's Disappointing Algiers Exhibit 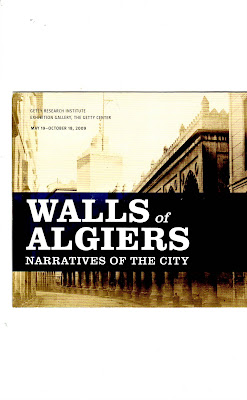 Visitors from France recently -- the Bardet/Danton family, who helped me when I was in France a few years ago, researching, and viewing films for, my book WORLD'S COOLEST MOVIE STAR: THE COMPLETE 95 FILMS AND LEGEND OF JEAN GABIN, VOLUMES ONE AND TWO (www.jeangabinbook.com).

The Bardet family -- husband and wife Lolo and Jean-Paul and their two kids Laetitia and Louis -- had never been to the Getty Center in Los Angeles, so I thought it would be a good excuse for me to catch up with the Getty's temporary exhibit, WALLS OF ALGIERS: NARRATIVES OF THE CITY, which will be in place through October 18th.

Of course, the famed Casbah section of the city of Algiers is famous for having appeared in Jean Gabin's legendary 1937 film Pepe Le Moko. I was looking forward to this exhibit, because I thought I would be treated not only to breathtaking images of Algiers, but also (maybe, I had hoped) some props or an original poster from the film? In short, I thought this exhibit would give me a comprehensive lesson in "all-things Casbah."

I was very disappointed to find that the Getty has relegated its Algiers exhibit to a small, 12 x 12 square-foot bedroom-sized room in a minor building, in the very back of the Getty Center, called The Exhbition Gallery. Very literally, the exhibit features two hanging maps of Algiers, a photo of a woman in a caftan, a couple of pictures of Jean Seberg visiting the Casbah in the '60s, and a glass table with a musical instrument and a scarf under it. That's it.

The Getty really dropped the ball on this one. You'll learn much more about Algiers just by watching the first six minutes of director Julien Duvivier's Pepe Le Moko, in which a narrator explains that the dusky Casbah is the home to Arabs, Berbers, black Africans, Turks, and kulughli (the offspring of Turkish solderis and Algerian women). Here are those first six minutes:


If you want to learn more about Algiers and the Casbah, watch Pepe Le Moko in its entirety, or read the great new 283-paged book which the Getty Center has produced in connection with its exhibit. (For some reason, Getty put a lot into the book, but not so much into the exhibit.) The book, like the exhibit, is called Walls of Algiers: Narratives of the City Through Text and Image, and the editors are Zeynep Celik, Julia Clancy-Smith, and Frances Terpak. You can buy it from Amazon.com, for $37.19.

You can also buy my own book, WORLD'S COOLEST MOVIE STAR: THE COMPLETE 95 FILMS (AND LEGEND) OF JEAN GABIN, from Amazon.com and Barnes and Noble.com.
Posted by Charles Zigman at 11:37 AM