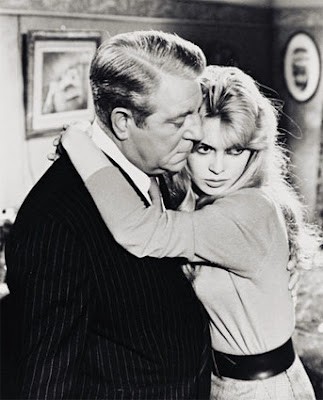 
Happy Birthday Brigitte Bardot, who wrote the foreword to my book WORLD'S COOLEST MOVIE STAR: THE COMPLETE 95 FILMS (AND LEGEND) OF JEAN GABIN, VOLUME TWO. (Go to www.jeangabinbook.com to find out how you can buy both volumes.)

Bardot appeared in forty-five feature films made between 1952 and 1973, including 1958's En cas de malheur, in which she co-starred, for the first and only time, with Jean Gabin. In Malheur, prostitute Bardot robs a store, and is defended by crusty old barrister Gabin, who is forty years her senior -- and of course, it's not long before the two of them are carrying on a tempestuous affair, with a tragic result. The literal title of the film means "In Case of Accident," but the film was released very briefly in the U.S., by Kinglsey Pictures, under the more lurid title, "Love is My Profession."

Brigitte Bardot has not appeared in a movie in thirty-six years, and today she continues to dedicate herself to the plight of cruelty against animals. To this end, she has created the Brigitte Bardot Foundation (it's the French equivalent of the American organization, P.E.T.A.), and you may read more about Ms. Bardot and her continuing great work by going to her website:

The ENGLISH-LANGUAGE HOMEPAGE FOR THE "FONDATION BRIGITTE BARDOT" is at:
http://www.fondationbrigittebardot.fr/site/homepage.php?Id=2

The FRENCH-LANGUAGE HOMEPAGE FOR THE "FONDATION BRIGITTE BARDOT" is at:
http://www.fondationbrigittebardot.fr