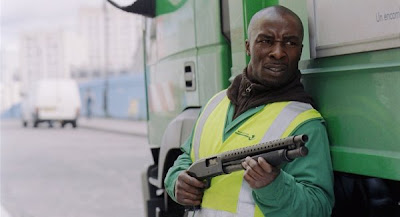 Several months ago on this blogsite, I mentioned MC Jean Gab'1 (pronounced: MC Jean Gabin), the popular French/Senagalese rapper who's taken over France.

Now, MC Jean is poised to take over America! This year, he starred in his first feature, director Pierre Lafargue's BLACK. The film had its U.S. premiere on March 14th at the South by Southwest (SXSW) Film Festival in Austin, and is presently awaiting North American distribution.

It is "this author's" dream that American movie studios will take notice and star MC Jean Gab'1 in his first U.S.-made action movie, and this will be doubly good news, because when the publicity machine gears up to introduce Americans to the rapper, they'll have to, by necessity, call people's attention to the legendary French movie star Jean Gabin (1904-1976) from whom MC Jean Gabin'1 got his name.

For more on both MC Jean Gab'1 and "the original" Jean Gabin, go to www.jeangabinbook.com, and read about (and buy) WORLD'S COOLEST MOVIE STAR: THE COMPLETE 95 FILMS (AND LEGEND) OF JEAN GABIN, VOLUMES ONE AND TWO, BY CHARLES ZIGMAN.