Parisians See Bracelet Given by Jean Gabin to Marlene Dietrich 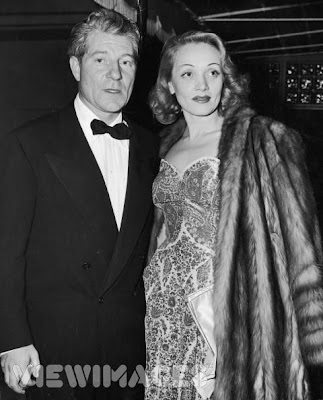 Here's an article I found recently on AFP: Between now and July 2009, visitors to the Museum of Decorative Arts in Paris can see art deco jewelry designed by Jean Despres -- including a bracelet which Jean Gabin presented to Marlene Dietrich, when the two dated in the 1940s:

PARIS (AFP) — Art Deco was so ahead of its time that its practitioners were accused of being "too modern" and their work looks contemporary today, even though it is more than 80 years old.

The Musee des Art Decoratifs in Paris has mounted a major retrospective to celebrate Jean Despres, one of the fathers of modern jewellery, and other leading "modernist" jewellers working in the Roaring Twenties and Thirties.

"Life was going faster. Cars, planes, trains, everything was going faster. They wanted things to be monumental, so they could be seen from a distance," explains Laurence Mouillefarine, associate curator of the show, picking out some big, showy brooches to illustrate the point.

"They also wanted their work to be more affordable, so they used silver or silver plating instead of gold, and semi-precious stones like citrine, onyx, moonstones and rock crystal, much cheaper than diamonds."

Lacquer, which the Chinese brought to Europe during the war, when it was used as glue on aircraft propellers, was also popular.

The new style was known as "sports jewellery" or "travel jewellery" and still tended to be worn only by an elite, avant-garde set.

"It's hard to appreciate how very daring this was at the time. Costume jewellery didn't exist," says Mouillefarine.

Despres had 80 of his pieces rejected by the jury for the Salon D'Autumne trade show in 1928 for being "too modern," says Melissa Gabardi, who wrote the first monograph on Despres 10 years ago.

Despres was very influenced by Cubism: the painter Georges Braques was his best friend.

During World War I he worked on aircraft engines and his early jewellery was openly inspired by machinery and engine parts, like his camshaft ring.

He initially used silver, because he didn't have the money for more expensive materials, together with coral, onyx, enamel and lapis lazuli.

The ring remained his favourite. "What I enjoy mostly and that I can do in a different way from the others," he told the engraver Etienne Cournault, with whom he collaborated.

The exhibition has a showcase with a chronological display of rings from the 1920s to 1970s and a small room wallpapered with his designs, which "are very easy to wear even today," says Gabardi.

"He was very successful in his lifetime. His work was collected by stars, like Josephine Baker and Andy Warhol," says Gabardi.

But because he didn't have children to carry on the business, he had largely been forgotten by his death in 1980.

Art Deco had already fallen out of fashion by the 1940s. In fact, it wasn't until 1969 that the term "Art Deco" was coined by the British historian and journalist Bevis Hillier to refer to the geometric style of the 20s and 30s.

Apart from the Despres pieces which the artist himself donated to the museum, 80 percent of the exhibits come from private collections, more than half abroad. One of the major contributions is from the American model and face of Victoria's Secret, Stephanie Seymour.

Highlights include a 1930 Cartier bracelet of ballbearings set in gold which actor Jean Gabin gave Marlene Dietrich and a 1932 rock crystal bracelet owned by Gloria Swanson.

A silver pendant with green and black lacquer by Jean Fouquet was acquired in the 1970s by Chanel's chief designer Karl Lagerfeld, a notoriously avid art collector.

A bracelet by Suzanne Belperron was worn by the style icon, American Vogue editor Diana Vreeland.

Apart from jewellery, exhibits include exquisite objets d'art -- ultra-slim cigarette cases, rendered obsolete by today's no-smoking laws, with such symbols of modernity as a racing car or a typewriter.

There is even a sleek little vanity case. Once only prostitutes wore make-up, but by the 1920s free-spirited women even dared to make themselves up in public.

It took the curators a full year to track down the items they wanted for the exhibition, as most are in private hands. And even then, sometimes they were frustrated.

"An old lady with a bracelet said she couldn't bear to lend it to the exhibition because she didn't have that much more time left to wear it. I didn't insist," says Mouillefarine.