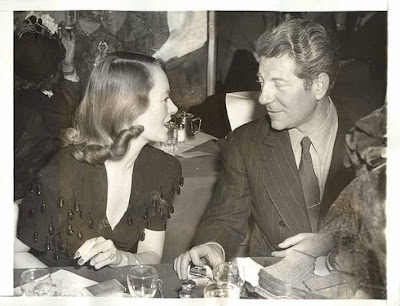 This Associated Press wirephoto shows Jean Gabin with his date for the evening, Lady Ashley Hamilton, at a New York nightclub on March 7, 1941.

Lady Ashley of Alderly (nee Edith Louise Sylvia Hawkes), at this point, was the widow of swashbuckling silent superstar Douglas Fairbanks, Sr., to whom she had been married for three years, between 1936 and 1939. Nine years after this picture is taken, she will marry Clark Gable (you can read more about her marriage to Gable in this 1950 Photoplay article: http://www.geocities.com/cactus_st/article/article85.html).

During his all-too-brief U.S. period (1941-1943), Jean Gabin also dated Marlene Dietrich and Ginger Rogers. When this picture was taken he had not yet starred in his two American films, Moontide and Impostor.

WORLD'S COOLEST MOVIE STAR: THE COMPLETE 95 FILMS (AND LEGEND) OF JEAN GABIN BY CHARLES ZIGMAN, is available at Amazon.com, Barnes and Noble.com, or ask a bookseller near you.
Posted by Charles Zigman at 7:36 AM