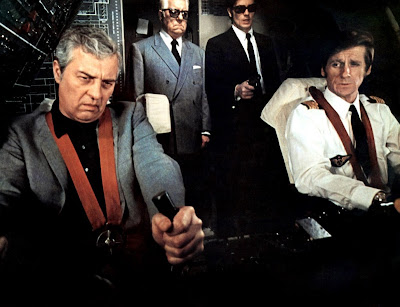 Last night, March 24th at 8:35pm, 3.9 million French people tuned in to watch Jean Gabin in the landmark 1969 film Le Clan des siciliens (The Sicilian Clan) on France's Channel 3, which is pretty fantastic for a 40-year-old movie. John Woo is developing a remake of this legendary caper film, and it's no wonder; as I've mentioned many times on this blogsite, it's a great, fast-paced movie, and worthy of everybody's attention -- and I'm not just talking about Gabin Fans, but everybody who likes very cool movies.

Incidentally, Charlie Chaplin's son, Sydney Chaplin, who plays one of Gabin's sons-in-law in the film, passed away in Rancho, Mirage California on March 3, 2009 at the age of 82. Actor-restaurateur-bon vivant Sydney Chaplin appeared in thirty-one feature films as an actor, including not only The Sicilian Clan but also two films directed by his father -- Limelight (1952) and The Countess From Hong Kong (1967).

For more about Jean Gabin, read WORLD'S COOLEST MOVIE STAR: THE COMPLETE 95 FILMS (AND LEGEND) OF JEAN GABIN, VOLUMES ONE AND TWO, by Charles Zigman, available through Amazon.com, or ask for it at your "finer" booksellers...