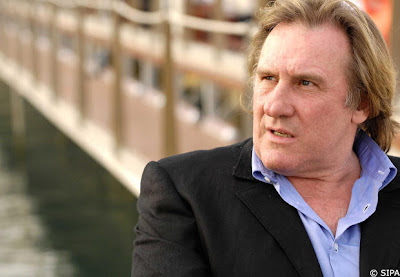 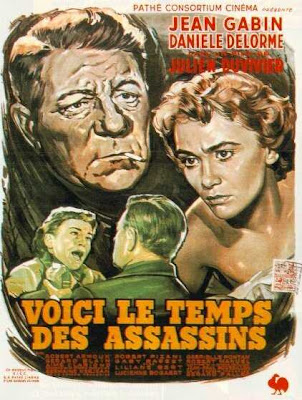 A couple of weeks ago, I wrote a blog about the three new Jean Gabin DVD releases that we're getting this spring.

There's some equally important Gabin News this week: Two Jean Gabin movies will be re-made in 2009! A few months ago I mentioned that director John Woo was developing his re-make of the high-octane 1969 Jean Gabin thriller Le Clan des Siciliens (The Sicilian Clan), so that's something to look forward to (or: maybe not, since the original is as close to perfection as you can get, in a heist movie).

Well, here's some up-to-the minute news which was just announced on February 18th, 2009:

This year, the French director Tonie Marshall (Passe-Passe, 2008), who is also an actress of great repute, will helm a brand new re-make of Jean Gabin's 1956 noir mindroaster Voici le temps des assassins, a film which is widely considered, throughout France (as well as by the director Bertrand Tavernier) to be the final masterpiece of director Julien Duvivier, who had earlier directed Gabin in Pepe Le Moko, La Belle equipe, Maria Chapdelaine, and Impostor, and who continued to direct movies up through his death in 1967. Of course, as with many other Jean Gabin movies I wrote about in my book WORLD'S COOLEST MOVIE STAR: THE COMPLETE 95 FILMS (AND LEGEND) OF JEAN GABIN, the original Gabin/Duvivier version of Voici le temps is completely unknown in the United States today, even though it was released in one NYC theater in 1957 for about a week, in a severly truncated (cut by 15 minutes) and horribly English-dubbed version, which completely castrates Duvivier's intended vision. (I actually saw this bastardized version, courtesty of a collector who sent me a VHS transfer of her own 16 millimeter print; it's shocking how American distributors used to butcher great classics of foreign films, including a number of Jean Gabin movies.)

In Voici le temps des assassins, chef Andre Chatelin (Jean Gabin in the old version, Gerard Depardieu in the new, upcoming re-make) owns a restaurant in the Les Halles section of Paris (Les Halles, of course, is the large outdoor market in the 1st arrondissement) who gets grifted by a team of manipulative, hopped-up mother and daughter prostitutes, two unsavory women who turn his life into a living hell. To tell you more would spoil the surprise, because Voici le temps des assassins offers one great twist after another -- even a final twist which is actually jaw-dropping, in the truest sense of the word.

Hopefully, this new re-make of Voici le temps des assassins will lead to a greater awareness of the original Gabin/Duvivier version, here in America. Since Tonie Marshall is a very good director, I'm sure that the re-make stands a good chance as well. Marshall is the daughter of the French actress Micheline Presle, who co-starred with Jean Gabin in 1960's Le Baron de l'ecluse, and the American film actor William Marshall, who appeared in a number of movies in the 1940s and weirdly, William Marshall was also married to both Michele Morgan (Gabin's most important co-star)and Ginger Rogers (Gabin's lover, in the 1940s).

BREAKING NEWS: Yesterday, February 27th, 2009, the actor Jean-Paul Roussillon, age 80, won Best Supporting Actor at the Cesars, the French version of the Academy Awards, for his role in director Arnaud Desplechin's new film Un Conte de Noel, which was released in the U.S., at the end of '08, as A Christmas Tale. Fifty-three years ago, in 1956, a much younger Rousillon played Amedee, one of 'chef' Jean Gabin's sous-chefs, in the original Voici le temps des assassins.
Posted by Charles Zigman at 1:29 PM