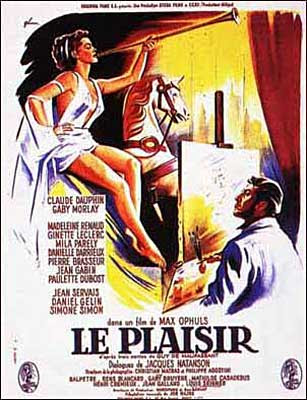 2009 started off with a bang -- and that 'bang' was supplied by the heater of Jean Gabin, whose 1937 classic Pepe Le Moko played at Seattle's SIFF theater on Friday January 16th, as part of the repertory theater's 37-film festival "French Crime Wave, 1937-1981." Similar to the festival which played at New York's Film Forum in '08, this Seattle festival also featured a rare screening of Gabin's 1969 thriller The Sicilian Clan on Thursday January 20th.

And there's more to come:

On Thursday February 19th, the Miami Beach Cinematheque (512 Espanola Way, Miami Beach) will feature a rare 35mm screening of director Max Ophuls' 1952 classic Le Plaisir, the only film collaboration between Ophuls and Gabin, as part of a three-film Ophuls festival (the other two films to be screened are 1950's La Ronde and 1955's Lola Montes).

A three-part anthology film based upon the short stories of Guy de Maupassant, Le Plaisir, besides being one of Ophuls' characteristically entertaining idylls, is also unusual in the Gabin cinema canon, because it's one of the rare films in which we get a smiling, cheerful Gabin, in lieu of the somber tough guy we're used to.