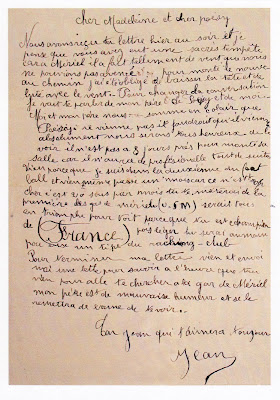 Here's a rare artifact which was just brought to my attention by Corinne Marchal, who sent it to me (she's the Webmaster of the Jean Gabin Museum in Meriel, France): It's a letter written by Jean Gabin -- in the original French, in his own hand -- in 1918, when he was fourteen years old. My friend Laurence Bardet-Danton translated the letter from French into English, exclusively for this blog posting, and you can click on the letter to enlarge it.

Some background about the letter:

As you know from reading my new book WORLD'S COOLEST MOVIE STAR: THE COMPLETE 95 FILMS (AND LEGEND) OF JEAN GABIN, Jean Gabin absolutely adored his sister Madeleine who was older than him by seven years, and he was threatened, at first, when Madeleine begain dating a boxer by the name of Jean Poesy.

What Gabin didn't count on, is that he'd really grow to admire Poesy -- Poesy, in effect, became "the father that Jean Gabin never had," since Gabin's real father, Ferdinand, was often away from home, performing in musical theater. In fact, Poesy would eventually set up a boxing studio in Meriel, where he would teach "the sweet science" to Jean and other teens.

Following, is the English translation of the letter. Gabin has written it to his sister Madeleine and to Poesy who were vacationing together in Paris, at the time. In the letter, we see that Madeleine will be returning home to Meriel for a visit, but that she will not be bringing Poesy along on this trip -- and young Gabin is sad, because he was really looking forward to seeing him, and even having Poesy join a local soccer team. (The stream-of-consciousness-style teen-aged grammar is Gabin's own):

We have received your letter yesterday evening and I thank you... in Meriel we had a big storm and it was difficult to walk. To go up the path, I had to bend my head and battle with the wind. To talk about something else, I want to tell you that I am very angry that Poesy is not coming. He absolutely must come. We would be very happy to see him. He can spare 8 days to set up the room [here, Gabin is referencing the boxing studio which Poesy would soon be organizing in Meriel].

There will be no people in the trade right away ...You should come because I am in the Second soccer [team], and you should come for a month, because it's not expensive. It's 20 cents a month. You could be on the First team; the Meriel guys would carry you high in triumph because you are a lightweight champion of FRANCE; you would, at least, beat a guy from the "Racing Club" [another local French soccer team]... To finish my letter: Madeleine, Please come and tell me when you will be arriving, so I can pick you up at the Meriel station. Father has been in a bad mood lately, and he will be in a good mood when he sees you!