Eastbound and Down: Jean Gabin Played a Trucker in Two Great Films 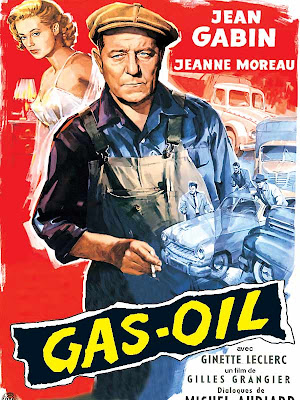 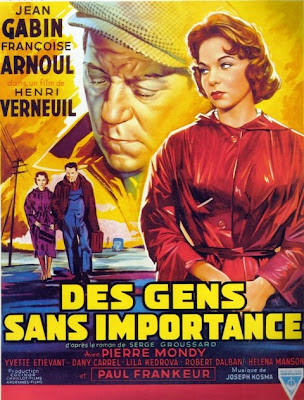 During the second half of his illustrious film career, which I've documented in the second volume of my book WORLD'S COOLEST MOVIE STAR: THE COMPLETE 95 FILMS (AND LEGEND OF JEAN GABIN, an 'older' Jean Gabin, in the 1950s, '60s, and '70s played any number of ultra cool/suave gentleman-gangsters, cops, mentors, and white-haired patriarchs.

He also played, in two movies which were made in quick succession, in 1955 and 1956, truckers. And if you think about it, who better to play a trucker than Jean Gabin - truckers, like Gabin (in real-life and in his movies) are professional and contemplative (one would hope) drifters who spend long stretches of life driving along life's existential, and real, highways.

Gas-Oil (1955) and Des gens sans importance [People of No Importance] (1956), are two masterful movies in which Gabin played surly, world-weary truckdrivers, and his performances in each film are top drawer. Weirdly, while both of these movies are considered to be important classics of 1950s cinema in France, neither of them was ever released in the United States. (Gas-Oil's production company, Intermondia, considered releasing Gas-Oil in the United States, even reportedly striking an English subtitled print, which it re-titled Hi-Jack Highway, but a US release never happened.)

In director Gilles Grangier's taut Gas-Oil, Gabin appears opposite another French screen legend, Jeanne Moreau. He's trucker Jean Chape (the rough translation in English is "Jean the Man!") and he's on the lam from a bunch of hardcore thugs who think he's stolen their cache of money -- which, decidely, he has not. Gas-Oil is the only film in which Gabin and Moreau ever co-starred, although the legendary actress did have a small, supporting role in the previous year's Touchez pas au grisbi (1954), the film noir which brought Gabin into what was essentially his "second" career in France -- that period during which he played the 'older' guy, instead of the matinee idol which he had played when he was younger.

In director Henri Verneuil's Des gens sans importance, married fifty-something Gabin is trapped in a loveless marriage, but finds solace -- not to mention succor -- in the arms of twentysomething Francoise Arnoul (who also starred with Gabin in the previious year's French Can-Can), and their May-December romance, glorious at first, takes an unfortunate turn for the tragic.

While neither Gas-Oil nor Des gens sans importance has ever been available in America, they ARE both available on DVD in France -- however these two PAL (European)-format DVDs are in French-only -- in other words, there are no English-subtitles; if you're fluent in French, you can find them on French Amazon.com (www.amazon.fr) or on FNAC.com.

If anybody from the Criterion Collection happens to be reading this, these two truckeriffic Gabin efforts from the mid '50s would really benefit from being packaged together in a 2-film boxed set... with English subtitles, of course!
Posted by Charles Zigman at 11:23 AM