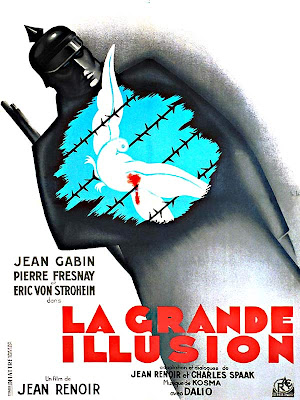 I'm hard at work on the all-new, expanded/revised 2009 edition of my book, which should be available around September 1st (keep checking back at this blogsite for the exact date), and this is why I haven't been posting blog entries regularly.

In the meantime, how would you like to watch a Jean Gabin movie right now?

Director Jean Renoir's 1937 classic, La Grande illusion, is perhaps the best known of all of Gabin's ninety-five feature films and, of course, it's considered to be one of the Top 100 Movies of All Time by almost every serious film critic on earth.

Grand Illusion is, primarily, the story of three World War One fighter pilots -- an aristocrat (Pierre Fresnay), a member of the working-class (Jean Gabin), and an 'eternally wandering Jew' who fits in with neither of those two classes (Marcel Dalio) -- and how their friendship will overcome their differences, especially when they are captured and placed in various POW camps. Their 'foil,' who turns out to be good-hearted, is the German colonel Von Rauffenstein, who's played by Eric von Stroheim (his is an iconic role; even if you've never seen Grand Illusion, you've probably, at some point in your life, seen an image of Stroheim from this film -- bald-headed, monocle, standing collar, etc.).

I hope you enjoy Grand Illusion. The film has been uploaded in 15 chapters, but don't worry, you don't have to do anything; at the end of each chapter, the film will automatically proceed to the following chapter.

To read more about Jean Gabin and Grand Illusion, buy a copy of WORLD'S COOLEST MOVIE STAR: THE COMPLETE 95 FILMS (AND LEGEND) OF JEAN GABIN, VOLUMES ONE AND TWO. The New/Expanded/Revised 2009 Edition should be available on September 1, 2009.

Thank you! Hope you're having a nice summer.