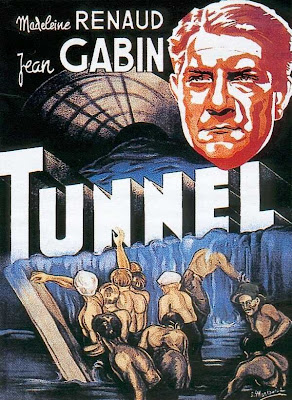 In 1930, the German author wrote a book called Der Tunnel, and it became an instant best-seller in that country; it's the powerful (and fictional) story of a quietly powerful engineer who spearheads the first underground transatlantic tunnel, spanning between Europe and the U.S.; we see both the European and American teams building together, with the emphasis on the American team. The idea is that a super train will be built between the two continents, thus bringing the entire world together, in the spirit of brotherhood.

In 1933, the German production company UFA produced two simultaneous versions of the film -- one in the German language featuring German actors and director, and a second version in France, which featured French actors and director. Both versions are reportedly the same, shot-for-shot and cut-for-cut, and it's important to note that, before subtitles became common, countries used to make entire versions of their films in different languages, for export to different countries. For me, it is the French version which is of more interest, because it starred the great international movie star, Jean Gabin, in the only science fiction movie of his entire forty-six year, ninety-five film career.

Four years after Le Tunnel, Jean Gabin, of course, would become internationally famous for a handful of movies in which he starred in the mid-to-late 1930s, including Pepe Le Moko, La Grande illusion, La Bete humaine, and Le Jour se leve -- films in which he played movie history's consummate 'tragic drifter,' a man who was tough on the outside and marshmallow-soft on the inside. But in the Tunnel, his 12th movie in only four years (he had begun starring in movies in 1930), thirty-year-old Gabin's quietly powerful personality is already fully-formed, and he's on the top of his game.

In La Tunnel, Jean Gabin is great as MacAllan, the engineer who spearheads the building from the American side. (Yes, the American team is played by French actors, speaking French, which is a bit disconcerting, at first.) Along the way, MacAllan's workers are beset by all manner of problems, including a bad guy trying to sabotage the project, deceitful workers, and tunnel sickness. But he overcomes them all and leads his team to victory.

Besides being one of the great science fiction movies of the 1930s -- it definitely rivals the other 1930s sci-fi movie that's been universally recognized as the stalwart in that genre, director William Cameron Menzies 1937 vision of Victor Hugo's Things to Come in both its ever-present humanity and in its ground-breaking special effects, which are just as awe-inspiring as any CGI effects today (particularly the bullet trains) -- Le Tunnel is probably the only Jean Gabin movie which could be re-made today by a major Hollywood studio, because it's exactly the kind of big, plot-driven picture that Jerry Bruckheimer does very well.

So if you work for Criterion or Rialto, and you want to introduce Americans to a great, rousing sci-fi classic -- look into Le Tunnel!.

PS: While you're waiting on the French-language/Jean Gabin version of The Tunnel to be released on US DVD, the good news, is that right now, you can take a look at a subsequent version of the film which was made two years later, in English, as a U.S./British co-production, and which IS available on DVD in North America: It's 1935's The Tunnel, directed by _______; based on the same source material as the French version (the novel), it's "almost" as good as the Gabin version and, while it doesn't feature Gabin, it does have the American cowboy star Richard Dix as MacAllan (with Walter Huston ably aiding and abetting in the role of the sympathetic/humanistic President of the United States).
Posted by Charles Zigman at 9:35 AM