Marlene Dietrich: Her "Lost" Film is Not Lost! 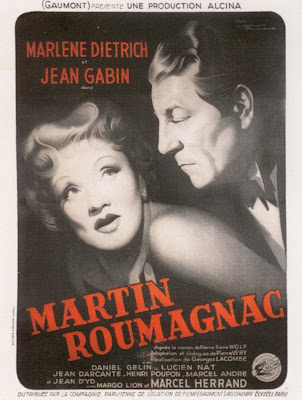 In 1946, Marlene Dietrich co-starred with her real-life lover Jean Gabin, the great French movie icon (and star of Pepe Le Moko and La Grande illusion) in director George Lacombe's hypnotic Martin Roumaganc, a kind of proto-Streetcar Named Desire -- released in fact, only a year before Williams' Streetcar premiered on Broadway -- in which a small time prostitute played by Dietrich (as in Streetcar, her character's name is Blanche) falls in manipulative love with an inarticulate, rough-hewn, "pre-Stanley Kowalski" contractor named Martin (Jean Gabin), torturing him emotionally until he commits a savage act.

The long and short of it, is that Martin Roumagnac is amazing, and the fact that it is completely unknown in the United States today, is entirely related to the fact that when it was very briefly released in the US in 1948, as The Room Upstairs (one movie theater in NYC, a one week run) the film's North American distribution company, the now-defunct Lopert Pictures, excised 31 minutes from the 115-minute film, apparently rendering its own 80-minute cut completely senseless: According to published reports, in the truncated US/Lopert cut, all references to the fact that Marlene Dietrich's character is a prostitute were removed, and since the whole film is about the fact that Dietrich's character is a prostitute, one can only imagine how choppy this version may have been.)

After this quick one-theater/one-week release in 1948, Martin Roumaganc was was never heard from in the US again -- in fact, for more than fifty years, the complete version of the film was hard-to-come by even in France, for a very simple reason: Jean Gabin and Marlene Dietrich were ensconsed in a torrid, real-life affair throughout the early-to-mid 1940s, and when they broke up (Gabin wanted Dietrich to marry him, but she was already married -- a lifelong marriage of convenience to the production designer Rudolph Sieber) Gabin was apparently so distraught, he bought up, and destroyed, as many of the uncut prints of Martin Roumagnac as were available!

In 2006, however, Canal + released the completely uncut Martin Roumagnac in a digitally restored edition on DVD; I saw it when I was researching my new Jean Gabin book WORLD'S COOLEST MOVIE STAR, and it's truly an astounding film -- a haunting 1940s classic, with cinematography by Roger Hubert (he shot Carne's Les Enfants du paradis) which recalls the great look that DP Henri Alekan gave to Cocteau's Beauty and the Beast. While you can purchase the uncut Martin Roumagnac DVD on line, from Amazon France (www.amazon.fr) or from www.FNAC.com, it's a Region 2 DVD, which means that it is only playable on European DVD machines (unless you own an international DVD player, which isn't too hard to find) and it is in French only -- which is to say that the DVD has neither English subtitles nor English dubbing.

Part of the reason I wrote my new book WORLD'S COOLEST MOVIE STAR: THE COMPLETE 95 FILMS (AND LEGEND) OF JEAN GABIN is because I wanted to introduce American readers to Jean Gabin's movies, many of which, like Roumagnac, have never received proper US releases, in theaters or on DVD. Anyway, hopefully, some forward-thinking US company (Rialto or Criterion?) will one day, and sooner rather than later, release Martin Roumagnac on an English-subtitled DVD, so that American audiences can enjoy this great "missing" 1940s film classic. Never before had Marlene Dietrich been so alluring; never before had Gabin been so cool...

To find out more about Martin Roumagnac, more about the Dietrich/Gabin affair, and more about how Martin Roumagnac may have been squelched in the United States because it may have "directly inspired" Williams' A Streetcar Named Desire, which premiered on stage in New York a year after Martin Roumaganc had its (very) limited theatrical release in New York, go to www.jeangabinbook.com and read WORLD'S COOLEST MOVIE STAR: THE COMPLETE 95 FILMS (AND LEGEND) OF JEAN GABIN, VOLUMES ONE AND TWO.